Excerpt:
The scars on my legs were still red and raw. Wayne flinched when he saw them.
“I know,” I said. “They’re horrible, aren’t they?”
“Oh, sweetie.”
I burst into tears. Being Wayne, he burst into tears right along with me. Then he carefully climbed onto the couch and cuddled me like a teddy bear while we cried our hearts out together.
At one point Wayne caught his breath long enough to say, “Look at it this way, honey–better sliced than diced, right?” Too late, he clapped his hand over his mouth, eyes round with horror. I stared at him, tears still trailing down my face, and started to laugh. Wayne laughed, too. Pretty soon we were absolutely howling, holding on to each other for dear life.

After surviving horrific abuse at the hands of her now-deservedly-dead ex-boyfriend, Robin Callahan has 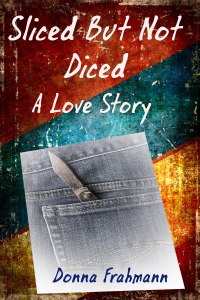 Sliced But Not Diced E-book

built a comfortably eccentric life in a cozy apartment right next door to her best friends Michael and Wayne. This haven is threatened when Robin finds herself powerfully drawn to Jared, a former heavy-metal roadie and recovering drug addict with a carefully unlisted past.

Despite her friend Wayne’s misgivings about Robin and Jared’s online meeting (“The internet is one big petri dish of pervs!”) and his outspoken response to Robin’s none-too-detailed account of her and Jared’s epic first face-to-face encounter (“So you’re dating a six-foot-four, long-haired Capricorn with no last name and eyes like a werewolf. What could possibly go wrong?”), the relationship seems to be everything Robin could hope for until Jared’s secrecy results in a series of misunderstandings that nearly tear them apart.

As Robin draws on her own hard-won strength and wisdom to help Jared shine a light on the monsters in his closet, her concerned friends run an unofficial online investigation that indicates Jared was a teenaged runaway who murdered his own parents. But all may not be as it seems…

4 thoughts on “SLICED BUT NOT DICED–A Love Story”