I knew it would.

I was already on the thin edge of my patience when the alarm went off. Since I can no longer blame things like that on PMS, menopause, or even the possibility of hair dye leaching into my brain, I decided the planets had aligned themselves in a manner guaranteed to twang on my last nerve; ergo, this day was gonna suck, and there was nothing I could do about it. 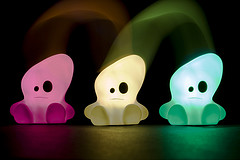 The same outfit that seemed so great when I set it out last night looked like sackcloth and ashes this morning. My hair adamantly refused to do what I wanted.  The writing that looked really good last night now was utter drek. I took it as a personal affront  that the internet was down when I wanted to check the weather. The items on my List of Hates were multiplying like loaves and fishes before I’d even finished my Cheerios, and I heartily cursed my lot in life.

It wasn’t until I’d mentally cussed out the fifth dumbass person I encountered that an old saying began to tug at the back of my mind–something like “when you meet five flaming morons in a row, maybe it’s time to take a look in the mirror.”

My day didn’t suck because of my outfit, my hair, the balky internet or the other people. It sucked because I chose to put on the mental equivalent of corpse-colored glasses. Everything I saw took on that tint, and I was too wrapped up in my angst to yank the damned things off.

Moods just come and go, if I let them. It’s only when I decide to set up housekeeping in a particularly ugly one that things get out of hand.

I’m basically a harmless little critter, but today I remembered that I do have one super-power: the ability to make myself miserable with just a flick of my mind, and, with another flick, completely reverse the process. The decision is mine.

3 thoughts on “Moods of the Moment”